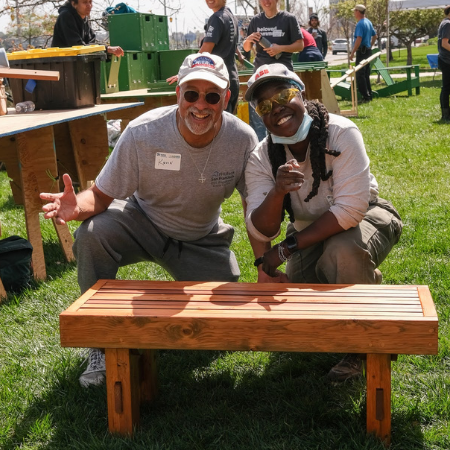 Our name says it all – Habitat for Humanity. We believe that through housing we can build a more just world for all of humanity. A world like Dr. Martin Luther King, Jr.’s vision of a Beloved Community.

To honor Dr. King’s vision of a community built on love and justice, we brought together volunteers from East Bay Community Energy, Federal Home Loan Bank of San Francisco, Cal Habitat, Dykes With Drills, and Girl Scouts Troop 61229 for our Beloved Community Build at Snow Park in Oakland.

It was a rare opportunity – particularly after the last two years – to gather such a vibrant cross-section of our community, and the atmosphere was celebratory. It was also, however, reflective. The morning began with a call to mindfulness from Habitat staff, a reminder of the day’s symbolism and purpose. The Beloved Community was a concept put forth by Dr. King who, in short, envisioned a community based on justice, equal opportunity, and love of our fellow human beings. A community devoid poverty, prejudice, and violence. The Beloved Community Build – and all of Habitat’s work – was conceived in the spirit of that community, and in gathering the community to build it.

Habitat for Humanity is, in fact, rooted in the ideals embodied by Dr. King’s Beloved Community. The seeds that would grow into Habitat for Humanity were planted in the soil of an interracial community, Koinonia Farm, in rural Georgia in the 1940s. The community’s views on racial equality were so radical in that place and time that community members were being excommunicated from their churches, the farm’s products boycotted by local businesses.

But it was this drive toward equity and justice – and the concept of partnership housing that was developed on the farm – that inspired Habitat’s future founders, Millard and Linda Fuller, when they joined the community in the 1960s.

And so, working toward justice is ingrained in Habitat’s DNA. It is not new. But the fact that it has endured, and grown, over the decades is due to the fact that people come into the work every day. People like the approximately 50 participants building at Snow Park that sunny Saturday.

The Beloved Community participants built playhouses and infrastructure for Oakland’s community gardens, but the build also supported Habitat’s core mission of creating affordable homeownership. It was a recognition of the fact that increasing access to affordable homeownership is itself an act toward justice. It is a way to combat long-entrenched injustices that have barred too many families from the opportunity of homeownership – and the improved health, financial, and educational outcomes that stem from it. The opportunity to build equity and generational wealth. The chance to create stable communities of engaged neighbors. To stem the tide of displacement that has ripped so many families – particularly families of color – out of neighborhoods they have called home for generations.

It was an understanding of how housing discrimination has been one of the most insidious forms that injustice has taken in our history – and that housing opportunity can be one of our most powerful vehicles for change.

Bonded by these principles, our Beloved Community Build participants worked together enthusiastically. They designed, decorated, and assembled playhouses with an homage to the City of Oakland, the essence of Dr. King’s vision, and the neighborhood spirit of a community garden. They screwed together Adirondack chairs, crafted garden benches, and manufactured garden stools. They made new connections and learned new skills. The day ended with a performance from Beats Rhymes and Life, an organization that empowers youth through the therapeutic capacity of hip hop, as well as a delicious lunch from local restaurant The Damel. 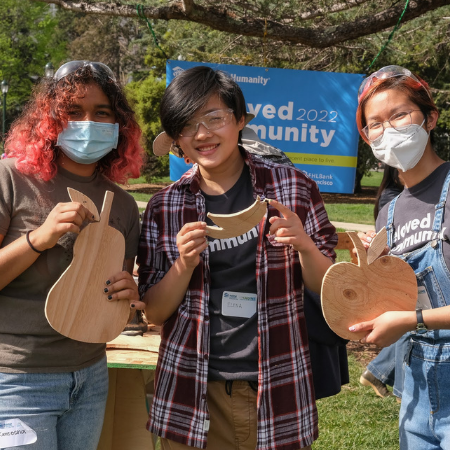 To see so many people spending a sun-drenched spring Saturday building with Habitat – the sight brought it back, again, to the words of Dr. King, who is famous for saying that “the arc of the moral universe is long, but it bends toward justice.” What one may not hear in those few words – but what is clear from Dr. King’s life and work – is that this bend toward justice is not an accident of fate. The arc bends toward justice because it is the work of many, many hands pulling. And by building the Beloved Community with us, your hands are those hands.