Last year, our neighbors in Texas, Florida, Puerto Rico, and the Caribbean saw their communities devastated in the wakes of Hurricanes Harvey, Irma, and Maria. The destruction was widespread, affecting 28.4 million people – 8.6 million households upended, with more than 715,000 homes damaged.

While the road to recovery is long, Habitat for Humanity was on the ground immediately and continues to pave that road with Habitat Hammers Back, an initiative to help the affected communities rebuild, stronger than before. 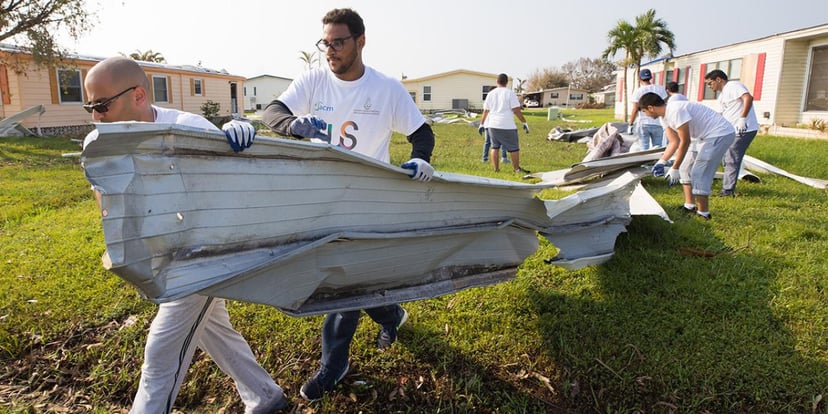 To that end, Habitat for Humanity set a goal of helping more than 6,000 families in Texas, Florida, and Puerto Rico over the next three to five years, and support the Caribbean in both its immediate and long-term response strategy, primarily in the Dominican Republic.

Habitat for Humanity is determined to do more than provide immediate assistance in the aftermath of . Habitat believes in providing pathways to permanence, a framework for helping families move toward safe, affordable, and permanent housing solutions. This means ongoing disaster risk reduction before disaster strikes, and in the wake of , a holistic strategy that provides immediate relief, early recovery in the form of short-term housing and financial interventions, and reconstruction and development that builds long-term strength, stability, and self-reliance through .

Of course, disasters like last year’s hurricanes are not just a matter of numbers. Each statistic is an individual story. It’s the Army Veteran in Texas whose home is being rebuilt with the help of volunteers. It’s the Habitat homeowners in Florida who built their home with volunteers eight years ago and saw some of those same volunteers return to help them repair their damaged home after Hurricane Irma. It’s the couple in Puerto Rico who see more than tools in their shelter repair kit – they see hope for a life rebuilt.