When you ask 27-year-old Anthony what kind of childhood he had, the first word out of his mouth is “phenomenal.” If you ask him why, he’ll attribute it to his parents first. Then, with his next breath, he’ll credit Habitat for Humanity. 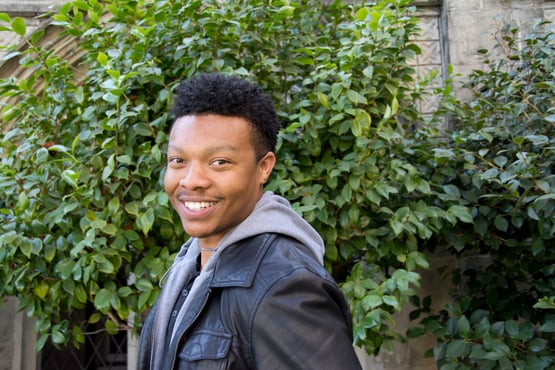 Habitat was indeed an integral part of Anthony’s childhood, since his family partnered with Habitat in 1995, when Anthony was seven years old. Anthony can still recall life before Habitat, when he was crammed along with his parents and two sisters into a single room in his grandparents’ basement, his family’s previous home damaged in the 1989 Loma Prieta earthquake. Life changed quickly, Anthony remembers, when his family qualified for one of eight new Habitat homes being built in Oakland. For a young boy, the most exciting part of that transition was the temporary apartment Habitat moved his family into, right across from the lot where his new neighborhood was taking shape.

The construction site was an amusement park for young Anthony, who despite being too young to pitch in on the Davis family’s sweat equity hours, worked his way into the action wherever he could. Anthony was a fixture on the site, covered in dirt while “harassing” and eating lunch with the volunteers. He still remembers many of the names – Paul, Lisa, and Roger, to name a few – of the people who became like surrogate uncles and aunts to him.

The excitement of construction gave way, though, to more profound changes in Anthony’s life. Whether it was having his own room for the first time, or riding bikes and building playhouses with all of the other kids in his new neighborhood’s cul-de-sac, or the block parties that gathered neighbors together rain or shine, or walking with his friends to a nearby park with one of the neighborhood dads, or opening his home up to company as they’d never done before, Anthony remembers those as “joyous times… a true Habitat community.”

As Anthony grew older, Habitat’s influence spread from his childhood into his future. “I was like an octopus,” Anthony says. “I grabbed every opportunity I could,” such as Habitat-organized tutoring and SAT prep sessions, as well as trips to Google and other tech companies. Even as he left home to major in communications at Cal State Northridge, Anthony earned a Habitat-sponsored scholarship to pay three years of rent as he studied. “I’m eternally grateful for this help,” Anthony says. “It enabled me to concentrate on schoolwork without the constant worry of whether I could continue my studies.”

Even when he was giving back to the organization, Anthony still credits Habitat with his personal growth. When he began speaking at Habitat fundraising events at age 13 – sharing his story as a “Habitat kid” – Anthony was “a little butterball, out there giving speeches to a roomful of grown-ups. It gave me a great deal of confidence, something I carried with me as I got older.”

That confidence stayed with Anthony as he graduated from college and eventually returned home to the Bay Area, landing a high-tech marketing job, a passion he attributes to those early Habitat field trips to Google and other tech companies. He remains close to his family: his parents who still live in their Habitat home in Oakland, his middle sister who has also returned to the Bay Area to pursue a career in public transportation after graduating from Virginia State University, and his eldest sister who lives with her husband and works toward her nursing degree in Pittsburg.

“I don’t know how my life would have turned out if I hadn’t been a Habitat kid,” Anthony says. “But I know in my heart that it’s changed my life for the better. I grew up always feeling like I was a part of a community – something I probably didn’t appreciate when I was a child, but looking back, I certainly do now.”