When Coyote Creek flooded parts of San Jose in February 2017, Carol Gillespie was shocked at the amount of damage a foot of water could do. Her manufactured mobile home had protected her belongings for 35 years, but with the source of the flooding just a couple hundred yards away, Carol found herself bereft of many of her belongings, some of them utterly irreplaceable.

No stranger to hard work, Carol cared for her elderly mother in her home for over 20 years, tended a beautiful garden, and ran her own business selling photographs and paintings. At 79, however, her dependence on social security for income hampers her financial flexibility, and chronic fatigue syndrome inhibits her physically. So when floodwaters invaded her home, Carol knew she would need help to restore her home and her health. 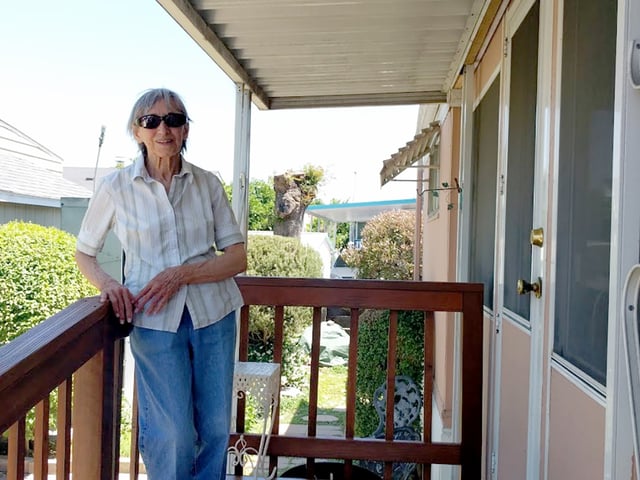 “I lost a lot,” Carol says. “The whole area in front of my house was full of ruined stuff.” The flood claimed some precious possessions, including one-of-a-kind photographs and artwork Carol had created, as well as costly tools. It also destroyed items that are more mundane, but valuable to a person living on a fixed income, like stored bulk goods Carol had gotten on sale. The skirting, deck, stairs, and railings of her home sustained damage, mold was spreading across the exterior, and the yard was a mess. Carol stayed with her daughter for awhile, as her home’s electricity and heat were knocked out by the flooding, during one of the year’s coldest times. The contaminated water made an arduous task out of cooking, washing, or even just having a drink. Carol was determined to see the silver lining, though. “I was forced to have a great attitude about it,” she says. “There are some things you need to let go of, and sometimes it takes a catastrophe, an event, to take care of it. Yes, it was sad to see it go, but it needed to go. I’m not there anymore; it’s time to move on.”

Even with her optimistic outlook, Carol was blown away by our Home Repair team. She’d expected the team to take care of just “what was most important,” the basics. So, when the team power washed the mold away, Carol “thought they were done, period.” It surprised her, then, to see the team come back multiple days, cleaning her deck and stairs and restoring the skirting around her home. When they offered to clean, sand, and paint her railings, as well as clean up the yard she treasures, Carol says she “was absolutely flabbergasted… I don’t have the money to do it, and I don’t have the strength to do it, but Habitat was there for me!”

Our Home Repair team did more than restore Carol Gillespie’s home. Along with it, they restored peace of mind, and they gave her yet more reasons to be optimistic. Carol will never forget her experience with the Home Repair Program. “Not only what they did,” she points out, “but the fact that they did anything, was just such a blessing.”