Catch Up with Habitat Homeowners Kiet, Binh, and Phong 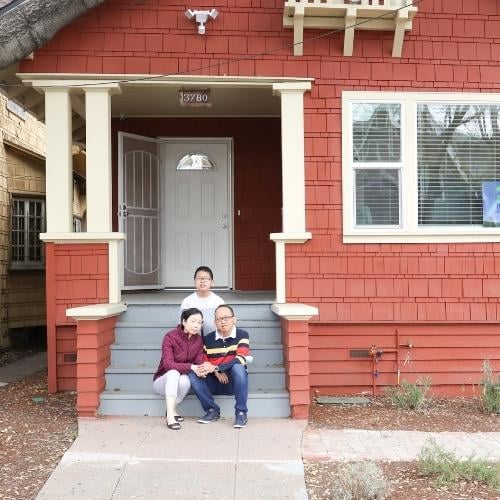 Kiet, Binh, and Phong began the new year in their new home in Oakland. Last year, the bungalow was mid-renovation, a punchlist of construction tasks posted on the front door and power tools resting on the kitchen counters. Now, Kiet opens a pristine front door eagerly to guests, and the tools have been replaced by prep bowls of bean sprouts and basil as Binh bustles over a bubbling pot of homemade pho. Thirteen-year-old Phong sits on the living room couch beneath a poster he designed, one that thanks Habitat for helping his family build their dream home. Before him is a coffee table bearing flowers and a platter of assorted candies.

Kiet adjusts one of the vases, clearly relishing the chance to host guests in their home. “Before,” he says, pointing to the candies and flowers, “we couldn’t do even these small things. And now, I can sit here and watch TV, we can watch a movie together. Before? No.” When he speaks of becoming a homeowner, Kiet continually comes back to “these small things.”

Previously, the family shared a single room in a San Leandro home crammed with seven other people. So, the small things are a big deal. The ability for Kiet to watch television in one room while Phong studies in his bedroom and Binh relaxes after a long day at work. The fact that when Binh’s sister visits, she can stay in their home. The simple freedom of having their own space.

Kiet loves being able to tell their son, “You’d like to drink something? Just go open the refrigerator! That storage room? That’s all your snacks. Go, enjoy it. You don’t have to close yourself up in your room.” Kiet says of Phong, “He’s changed, even in just the one month since we moved in.”

For Phong, it also comes down to the small things. When you ask what his favorite part of his house is, he doesn’t hesitate to say, “My room! I have my own bed. I have a closet.”

It’s a modest luxury that is so novel for him that Kiet and Binh recently found Phong hiding in his closet. It brought to mind their own childhoods in Vietnam, when they would take to their closets in a game of hide and seek. But for Phong, who’d never before had his own closet, this was a first.

“I feel more comfortable now,” Phong goes on. “It’s better. Now, I get to eat with my family.” 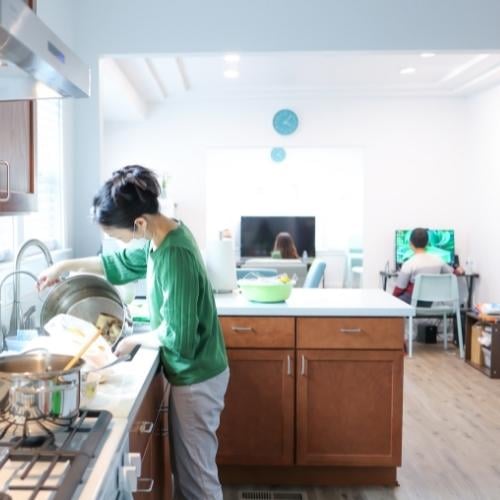 Binh nods emphatically. An accomplished cook, Binh loves feeding her family – but their previous living situation denied them the simple pleasure of enjoying meals together. Instead, she cooked in hurried shifts, and the family ate at different times to accommodate a multitude of roommates. Now, her Friday afternoons are spent walking two blocks to the local farmer’s market to gather ingredients for family dinners.

Unsurprisingly, when you ask Binh about her favorite part of the house, it’s the kitchen at heart of it. “The first time in my kitchen,” she smiles, “It was very nice. It’s very big.”

Kiet laughs. “She really loves – loves, not likes – all the cabinets!” he points out, gesturing to cupboards brimming with cookware and serving bowls. His social media posts consist almost entirely of photos of his wife’s amazing meals, to the point that his friends scold him for making them hungry.

A close second for Binh is “the living room – because before, we never had a living room.”

For Kiet, the reality of homeownership is still sinking in.

“It’s so good,” he says. “Right now, it’s just a dream come true. Even though we have already had some time here, we still say, ‘Is it true? Is it true?’ Even when I got the key, it was not until the last minute, when I put the key in and it unlocked the door – then I finally thought, ‘Oh! This is mine!’”

And as for Kiet’s favorite thing about the house?