After over 20 years in her San Jose house, Beverly Hayden knows the place she wants to call home for life. She’s comfortable in her element, Bev says, “so I’m not moving out!”

A Vermont native, Bev moved to San Jose in 1976 with her husband and children, and as she puts it, “I didn 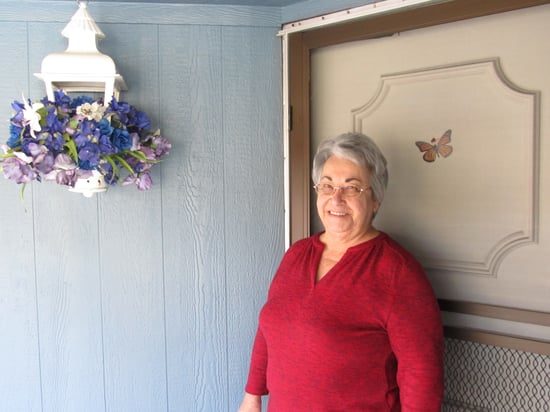 ’t want to go back!” This has been her family’s community for decades – her children growing up in San Jose schools, she herself now retired from a 24-year career with the San Jose school district – and Bev is determined to stay.

However, mounting maintenance and repairs were taking their toll. “My porch in particular,” Bev says. “It was going down.” She and her late husband had built the porch a decade ago, “back when I could get on my hands and knees and help.”

Now, though, the porch was in bad condition, and repairing it was out of her reach both physically and financially.

Her steps, too, were in disrepair and hard on Bev’s aching knees. The management of her mobile home park was writing her up consistently for the condition of her home’s skirting, which was “made out of that Styrofoam stuff, and worn.” The park management’s notices were a source of stress and worry for Bev.

Since connecting with Habitat’s Home Preservation Program, Bev’s outlook has changed. Her porch was replaced – “That saved me a lot, a lot of money!” Bev says – and Bev can spend afternoons outside, playing cards.

Habitat also replaced her steps with senior-friendly steps, with a lower rise. “That’s a big plus for me,” Bev comments. “It’s easier for me to get up and down, and I’m up and down quite a bit.”

Habitat’s Home Preservation team also conducted other maintenance and repairs, including the installation of grab bars in Bev’s bathrooms, which Bev refers to as “a real big deal.”

As for the skirting around Bev’s home, Habitat did more than touch up the cosmetic problems; the Home Preservation team replaced Bev’s foam skirting with stronger material. “It’s sturdier,” Bev says. “It’ll last my lifetime!”

Bev can have new peace of mind now, in the home that is still creating new memories year by year. Her son and daughter – still living in the area – along with her four granddaughters and two great-grandsons, still look to Bev’s home as the gathering place every Christmas. Bev spends time with close friends in the park, and likes to get out into the community for Bingo and shopping. Her daughter visits frequently, and they go out for dinner and play cards.

“I just know this was a very big help to me,” Bev says of her experience with Habitat’s Home Preservation Program. “And I’m sure it has been for everyone else who’s gotten the help, too.”