Central Commons, our 30-unit condominium development in Fremont, is about to welcome home it's phase of homeowners. One of these families is the Riveras- Eli and his wife, Liliana, their sons Diego (9) and Sebastian (6), and their dog Oreo. 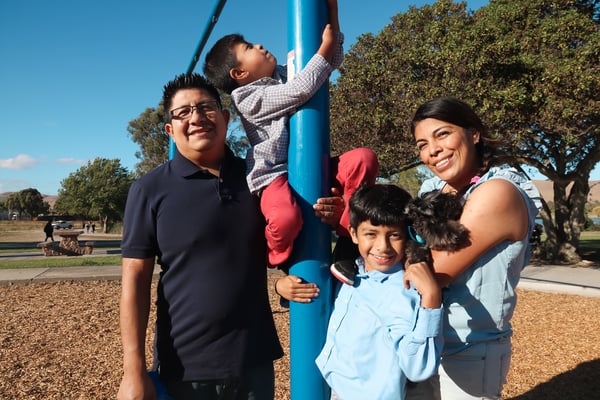 For eight long years, the Riveras have lived in a one-bedroom apartment in Sunnyvale. Their rent has increased twice every year since they moved in. Eli and Liliana have tried to find a new place to live but found nowhere safe that they could afford. “It was so frustrating,” Eli remembers. “I tried to get a loan, but the prices kept going up. We worked hard, but we were stuck.’”

The boys love to play soccer, but the apartment manager has forbidden them from playing in the courtyard. One day a neighbor banged on the shared wall so hard that framed pictures flew off the Riveras’ walls, scaring Diego and Sebastian. The crowded quarters made the tension worse. They lived in fear that if they complained, they risked eviction.

Eli, a postal worker in San Francisco, has seen co-workers move to Sacramento and other distant cities, taking on commutes of three hours or more. Eli considered doing the same, but worried about gasoline costs and spending so much time away from his family.

Eli grew up in poverty, shuttling between the homes of different family members. “When you move from one house to another you lose your friends,” he explains. “You lose everything when you start over again.” The sad memories fueled his dream of owning a home. But as with so many Bay Area families, Eli’s dream seemed far out of reach.

Everything changed when Eli’s friend told him about Habitat. The Riveras applied but kept their hopes low.

When Eli learned the family would be moving into a Habitat home, “I was jumping. I told my kids and they jumped too! They asked where the house was going to be, and I told them to put their shoes on. We drove to Fremont that very day. We took a picture of the dirt.”

Eli and Liliana quickly finished their sweat equity hours, building the foundation of their future home alongside their neighbors and Habitat’s caring volunteers.

“When the volunteers hammered nails in the house, they were building our dreams,” Eli says. “I told my kids, ‘When you grow up, you have to do the same thing like what we’re receiving. We’ll start building the dreams for somebody else.’”

At last, the boys will have a stable home — and a community play area with plenty of room to run. Diego wants to be an engineer or scientist. Sebastian is undecided but looks up to police officers and firefighters. One day he pointed out to his father that a firehouse is door to Central Commons. He said, ‘We don’t have to worry. We’re safe!” As he tells this story, Eli tears up. He knows how important security really is.

The Riveras know how lucky they are. They are grateful to Habitat donors and volunteers. They are also well-aware that many more limited-income families in the Bay Area can’t afford a bright future for their children.

At Habitat, we’re dedicated to providing affordable housing for families like the Riveras. Will you join us with donation?