A Future Homeowner’s Journey Toward Home 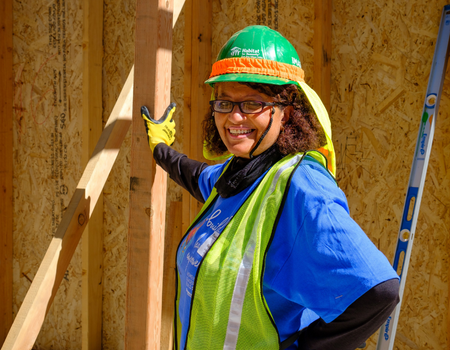 A single mother, Fikerete has raised her daughter here in California for 30 years. Rising rents pushed her out of Alameda and into Oakland, where she has watched her apartment’s ownership change hands several times while the rent crept ever higher.

Fikerete applied for programs left and right, in search of an affordable, peaceful, stable place to live. However, what she thought would be a year of making the best of a tight living situation – a makeshift bedroom in the living room and a sofa blocking an unused heater – turned into a decade. When an errant bullet pierced her window and lodged in her door, Fikerete’s hopes dimmed. She realized that even in the sanctuary of her home, she could be killed while doing dishes.

Things changed, though, when Fikerete was selected to purchase a home at Esperanza Place. “I got this chance,” she says. “There was still hope.”

That hope was rekindled from her first day on site. “When I came here, the first thing I saw: people, walking peacefully. I saw an old woman walking alone with her dog. I don’t have that chance where I live,” she says, citing safety concerns.