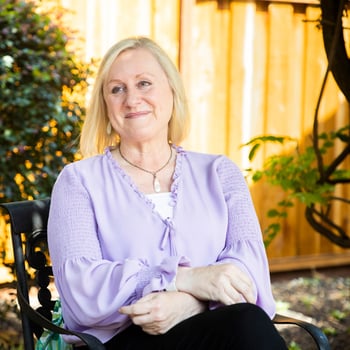 Janice Jensen began serving as Habitat for Humanity East Bay/Silicon Valley's President and Chief Executive Officer in January 2005. She is also a passionate advocate in the housing and philanthropic space, serving on the boards of SV@Home, the Non-Profit Housing Association of Northern California, the First Republic Bank Community Advisory Board, the First Republic Bank Foundation, and Habitat California.

Over a decade before Janice took the helm of Habitat East Bay/Silicon Valley, she had her first Habitat experience on the construction site, building homes in Mendenhall, Mississippi. What she learned there was the concrete reality of housing insecurity and inequity in our country. She may have thought her background in healthcare offered a keen perspective on the importance of housing – but, Janice says, "Habitat really peeled back the layers of the impact of insecure housing on human beings, especially kids." As she built homes, she saw up close the stark divisions in housing conditions and the clear ramifications in health and wellness. She saw the difference that was possible when a family had access to a decent home they could afford, and one they could call their own.

When she came to work at Habitat, she brought that experience with her, as well as her own. In fact, she called her parents to thank them for the fact that she grew up "with the ability to take housing security for granted. Housing security instilled at such a young age was a profound gift in so many ways."

While Janice's belief in the transformative impact of our mission only strengthened as she began her role, she found a steep learning curve awaiting her. Among her first actions, she remembers, "We literally rolled out a long sheet of butcher paper and wrote out a timeline of what it takes to build a Habitat home. I was stunned. What I'd known was down at the end of the process, when you build and then you hand keys over to a new homeowner. I was completely unaware of the many years that preceded that."

And so she learned, diving into the details and nurturing a team packed with expertise. Under Janice's leadership, the affiliate has grown astronomically, from an operation "building one development at a time; there wasn't even talk of a pipeline back then," to one that is now "serving more people in more ways, and I'm deeply proud of that." She has seen the organization through two mergers to serve one of the country's largest areas. She has led the growth of our programs so that we not only make new homes affordable for purchase by families with limited incomes – but also make the critical repairs and improvements that keep people in their homes, prepare more people for homeownership and other goals through Housing and Financial Counseling, offer financial services that build the capacity of fellow housers, and collaborate with other organizations to broaden our impact on the housing crisis. 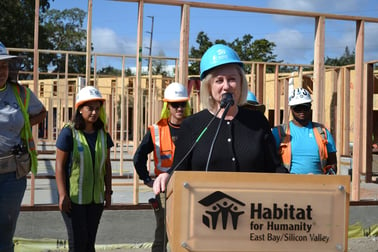 While Janice says, "I'm proud of my role in our growth as an affiliate," she immediately adds, "but it's not about me. If anything, it's about me getting people together with deep knowledge in different areas, stepping aside, and giving them the support and the bandwidth to do what they do." The team she has built is, for Janice, her real achievement. For someone who says, "My product is people – always has been," it makes sense.

And it's an ethos that permeates all of her choices. "One thing about me as a human is that I follow my true north, and that true north is service. I consider myself very lucky to have been able to create a career around service to people."

As she looks forward, Janice sees a need for innovation, flexibility, and a lot of hard work. "We don't have enough housing of any kind," she says. "Our whole housing ecosystem is upside down. But, we're constantly looking and keeping our finger on the pulse of how this ecosystem and public policy are moving, and trying to influence what we can, where we can, when we can – and responding, always, with service."