Building it forward: One woman's journey

For many of us, the last couple of months have shown us that a home is so much more than a place to lay our heads. Ask Linh Lam, Chief Information Officer at Ellie Mae, how the COVID-19 pandemic has affected her perspective, and she quickly says, “It really highlights how critical safe, affordable, and consistent housing is.” 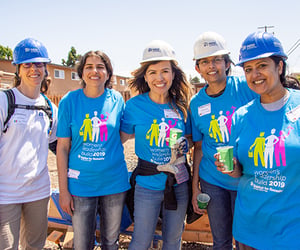 And that’s what Central Commons – and other Habitat developments like it – offer: the stability of a home that can be counted on. “During this time when it’s scary enough to go out to buy food,” Linh says, “the last thing you want to have to think about is, ‘Do I have a safe four walls to come home to every night, that I don’t feel like will be ripped out from under me?’”

That stability translates beyond the current health crisis, when a Habitat home is a shelter from the daily crisis we face in the housing market. By making homeownership a possibility for families with limited incomes – like the families living at Central Commons and the 19 more soon to join them – Habitat families gain a refuge from an unforgiving housing market. And homeownership, according to Linh, is a critical opportunity that lets a family build far beyond that “safe four walls.” It offers a “lack of volatility,” Linh says. “It’s your home that you own. It also becomes an investment. It’s something that is yours, that you can pass along to other generations as well.” 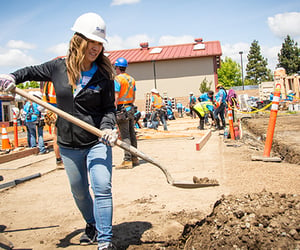 That, according to Linh, is what has made contributing to Habitat most meaningful. She has put in her own sweat at Central Commons, and she knows firsthand how much she has built beyond those days of volunteering. “Given my own background,” she says, “growing up with a family that struggled to have a secure home, consistent housing – I’m just very happy to be in a position where I’m contributing just a little bit, but I know how impactful it’ll be for these people. And I know that I wouldn’t be where I am if my family had not received help to get secure housing, so that they could focus on other things for me and my brothers, so that we could focus on education, and be able to be in a position to give back now.”

And as she sees the young children safe in their homes at Central Commons – and thinks of all the families and children that will follow – Linh knows that those families will build something far beyond the walls she helped raise.