The link between homeownership and educational prospects is well established. The opportunity of homeownership – and affordable homeownership in particular – means more than a house, especially when it comes to education. It can mean a quiet place to study. Knowing your backpack will be where you left it. Worrying about next week’s test instead of next month’s housing. A family with something set aside for future education.

During this pandemic, as for many of us our homes became our children’s classrooms, the link between homeownership and education has become even stronger and the effects clearer. And few families can attest to that as well as Megan and Sara's family. 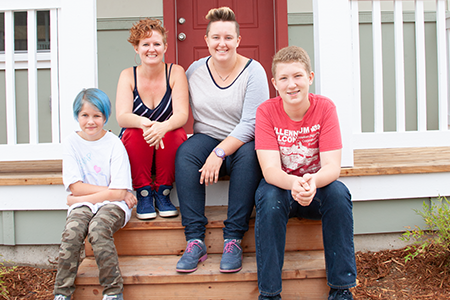 Like many families – and fellow Habitat homeowners – Megan and Sara have borne this pandemic with a houseful of children meeting their educational needs in unfamiliar and trying circumstances. “We have three awesome kids,” Megan says. Megan and her wife, Sara, are raising 18-year-old Isaiah – “just out of high school and learning just how expensive life is,” says Megan – 14-year-old Quinn just beginning the high school journey, and their youngest, four-year-old Rylan. The COVID-19 crisis, of course, confined them (along with two dogs and a cat) largely to their home at Muir Ridge in Martinez, which they’ve owned for six years.

Megan and Sara could see how important the home was to their children’s education, starting from a purely logistical standpoint. “Just having a space for everybody was important,” Sara says, adding, “We had enough space to be able to continue doing what we needed to do while sheltering in place.”

On top of that, though, this family has a unique perspective on the connection between housing and education because of Sara’s career in social work and Megan’s as a special education teacher – work she describes as “extremely rewarding.”

Homeownership meant that Megan had the security and the space to continue serving her students from the safety of her home.

The pandemic, Megan points out, “has been really hard for our society. As a teacher, I’ve seen the families of my students struggle financially, emotionally, and some have even lost their housing. So, we’ve been so grateful to have a stable house to raise our kids in and keep them safe.”

Megan and Sara's family have seen the benefits of that safety and stability magnified through the lens of the pandemic, though they have always valued what affordable homeownership meant, particularly for their children and the opportunities they could have. Longtime residents of the city, Megan doesn’t hesitate to say, “Martinez is home to us.”

However, Sara says of their time renting, “As we know with the way that housing goes in the Bay Area, we were month to month. There was no way to know how much longer we’d be able to stay where we were. Being able to actually buy a home in the Bay Area felt like it was going to be impossible.” That is, until they learned about Habitat building in Martinez. “Oh, that would be amazing,” Sara recalls thinking. “We could stay in Martinez. Our kids could stay in their same schools.”

Megan, meanwhile, was pregnant with Rylan when they moved into their Muir Ridge home, so as she says, “It’s the only house he’s ever known and loved.” A home of their own meant stability for their family, a community they could plant roots in, and the security their children needed to thrive.

Knowing they could count on a home they could afford was key to their confidence, especially during the pandemic. Sara, like many, was laid off early in the crisis and they weathered a period on a single income until she was able to find work again as a social worker. “But knowing that I owned my own home with Habitat,” Sara says, “it was very comforting. Because I knew that we were not going to lose our housing. I knew that even without my job, that with just one income for a brief time, we would be able to still afford our mortgage. We wouldn’t have to worry about our house being sold.” All around them, they were aware of “an exodus” as people lost income and couldn’t afford to stay housed. “I can’t imagine having to uproot my family,” Sara says.

With the security of homeownership through Habitat, Megan and Sara don’t have to. Their children have a secure place to live, rooms to study in, a neighborhood they love, and stability they can depend on – all key factors that impact education. And Megan and Sara have peace of mind while they continue the critical work they do to support the wellness, growth, and education of other children in our community.