When an organization has a mission that centers around “bringing people together,” it’s no surprise that bonds are often born at Habitat for Humanity. And often, that starts between staff members, where something as simple as adjacent cubicles and a common set of values can turn into a lifelong friendship.

“When I interviewed Hilda for the Event Coordinator position, I was hoping to find someone bright, capable, and mission-minded,” says Patti, our PR & Events Manager. “Hilda did turn out to be exactly that, but I never expected that she’d become one of my dearest friends as well.”

“It happened easily,” Hilda remembers. “We had our heads down in event management, but it would quickly go from discussing tent rentals to laughing over lunch.”

Both Hilda and Patti came to Habitat out of a belief in affordable housing and a desire to have professional lives that were driven by purpose. Patti found quickly from her first volunteer day in 2002 that Habitat would connect her to like-hearted people. 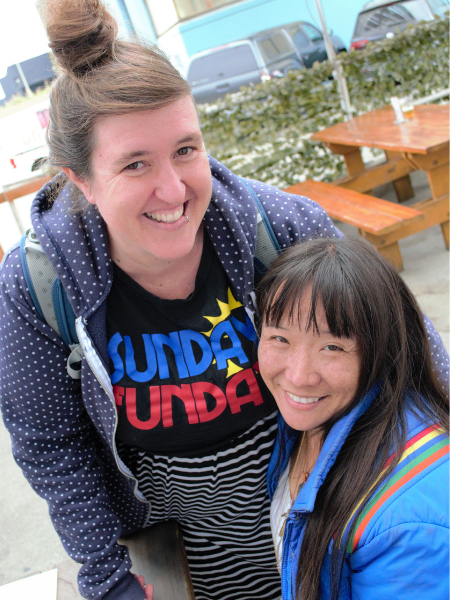 “I knew from that first day in Crockett that this was my village,” Patti says. “Before I knew everyone’s names, I sensed that I knew at least a bit about what they valued. And that bound us together.”

Hilda remembers a similar sensation from her first day in the Oakland office in August 2018. She dove straight into the deep end, just a couple short months before our biggest event of the year, Cycle of Hope. “But even in the hectic energy of it all,” Hilda recalls, “I could tell that I was surrounded by a sweet community of people working toward a common vision.”

When the COVID-19 pandemic shut our office doors, Hilda and Patti – along with all of our office-based staff – had to adjust their working relationship, along with their friendship, to a virtual world. For a tight-knit event team accustomed to working cubicle-to-cubicle and shoulder-to-shoulder, the two initially worried that their connection would fray.

“We didn’t need to worry,” Hilda realizes now. “Even over videoconferences and text messages, we were able to relate to each other as well as ever.”

“It’s actually a delight to see Hilda on my computer screen!” Patti laughs. “Now, I feel I have a relationship with her cats as well as with her!”

Even while they had to connect virtually, Hilda and Patti continued to be tied by the work they needed to do. “It’s not like our work at Habitat came to a stop,” Patti points out. “If anything, the imperative for it was clearer than ever, and we grew to rise to the challenge.”

“We had to pivot our events on a dime to a virtual format,” Hilda adds. “It was tough but so necessary. Our events, even in a virtual form, are a critical point for our community to connect and for Habitat to build support and continue serving.”

Now, though, Hilda and Patti are thrilled to be connecting in person again as our communities carefully re-emerge from the isolation of the pandemic. The recent Women’s Leadership Build offered lots of opportunities to do just that – both for the two friends and for the small groups of corporate volunteers who gathered throughout June in the Oakland Workshop to frame walls for Esperanza Place.

“We’re still navigating this new reality by reimagining our traditional events in a new form to keep everyone healthy,” Patti says. “But the fact that we’re coming back out of our homes and sharing space again – it means so much to us personally and to our ability to keep Habitat building forward.”

As the pair wind down from the Women’s Leadership Build and gear up for this fall’s Cycle of Hope, they sure do have quite a bit of work ahead of them, but they’re excited to face it together. Here’s to just one of the many friendships that Habitat has brought together and continues to nurture through crisis and beyond!