Meet Eligio and his Family

On a Sunday morning in early April, Eligio and his family were just hanging around the house.

This was no ordinary morning at home, though, as the family was gathered at Central Commons in Fremont, the neighborhood they will call home in just a few months. On this day, Eligio – along with his wife, Liliana, and his sons, Diego and Sebastian – were showing tour attendees around the site, now still the domain of exposed studs and rough staircases. But this doesn’t stop Eligio and his family from seeing the future clearly. 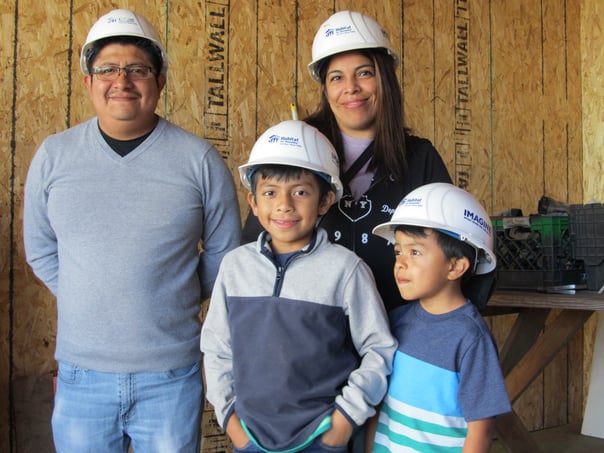 When Eligio dons a hard hat for a sweaty day of work at Central Commons – putting in hundreds of sweat equity hours on the construction site – he considers it a privilege. “This is the best thing that could happen to my life,” he says. “This is the most important thing I can provide for my family.”

And that’s because  their current apartment, Eligio says, “I believe I am limiting my kids.” The apartment is cramped and old, and their “very active boys” have long since outgrown the space. “The apartment is so old,” Eligio says, “so when they’re running around, the house feels like it could come crashing down at any time!”

Even so, the Bay Area is his family’s community, and they wanted nothing more than to put solid roots down. However, Eligio and Liliana have seen their rent nearly double in eight years, and they were facing the prospect of leaving the area. That  until they found out about Habitat.

Eligio applied for homeownership eagerly. “When you are thinking of your family, and giving them a safe place, a place where they can grow up with no limitations, you have to find a way to make it happen.”

Now, on the brink of becoming Habitat homeowners, the family sees a limitless future. From simple things – Liliana can’t wait to have a spacious kitchen and laundry at home, Diego is planning where to put his desk, and Sebastian is campaigning for a dog on day one – to the profound shift that comes with homeownership, Eligio’s family is looking forward.

“Once we have our house,” Eligio says, “we will know our family is safe, that they can grow up and make plans and afford college. We don’t have to worry about moving because our rent goes up, our kids jumping from school to school. Now I know this kind of thing cannot happen to my kids.”

And Eligio never forgets that a community has stood with his family to give them a hand up. “Now this dream is finally possible because Habitat is giving me the chance to make it possible,” he says. “You can’t imagine how you can change the life of a person. Habitat is full of angels.”