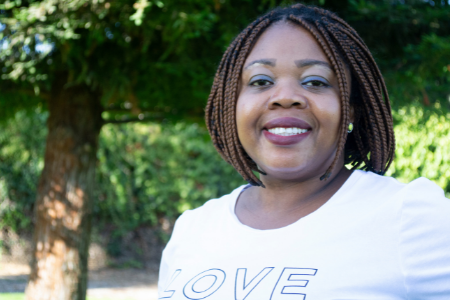 Rita doesn’t have much time for daydreaming.

A single mother to two active children, Rita also works full time as a Nursing Assistant in the East Bay, spending full days on her feet. But it doesn’t stop her from smiling when she does take a moment to imagine what life will be like in a matter of months, once she becomes a homeowner through Habitat for Humanity.

“I’m just picturing my house being nice and clean!” she says with a broad smile. She sighs happily. “Walking in, coming home from work, I want it to feel like...‘Now, I’m home, where it’s comfortable and clean!’”

Rita is quick to laughter, despite a busy life spent caring for others, children and patients alike. The pandemic, in particular, has been heart-wrenching: “It’s hard to see people suffering... It was really bad,” she admits. She is committed to the work, though. When at the outset of the pandemic the hospital provided extended leave for parents caring for children in remote schooling, Rita took only a fraction of the time she was offered. She returned to the work, to her patients, to the call of people in need of care. 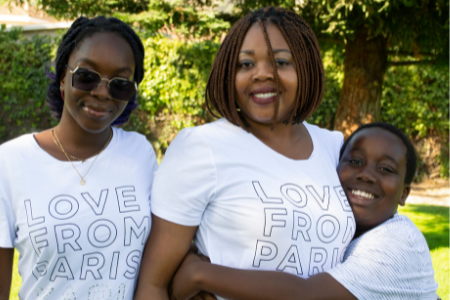 Her two children, however, are always top of mind, which is what brought her to Habitat. Rita’s daughter, 15-year-old Emmanuella, is an avid runner, while her 11-year-old son, Ezekial, plays soccer. The children currently share a room in their cramped San Leandro apartment, and Rita has been keenly aware of the fact that they’re quickly outgrowing the space.

“They need their own rooms,” Rita says. “As they get older, they really need their personal space.”

“And my own bathroom!” Ezekial pipes up from the next room.

It kept her motivated when she first applied for Habitat’s Homeownership Program five years ago and did not qualify. It kept her motivated when, several years later, a colleague – and Habitat homeowner – pushed her to re-apply. And it fueled her happiness when she received the letter notifying her that she’d been selected to purchase a home at Esperanza Place, a new neighborhood of 42 homes in Walnut Creek.

“Oh, I was so excited!” Rita remembers, the giddiness still evident on her face.

Now, she looks forward with equal excitement to the upcoming months of sweat equity. “I want to do it!” she laughs, eyes gleaming. “I want to see how they build it, to see everything come up!” She’s also eager to continue her progress in Housing & Financial Counseling, and building on the valuable skills she has picked up so far. “Being by yourself, you have to manage,” she points out. “So, it’s been really good."

Before Habitat, homeownership was a hard dream to hold onto. “Before the pandemic, my rent would always increase,” Rita says. “It’s expensive, but what can you do? You need a place to lay your head.” Still, Rita, who calls herself “a believer,” always had a feeling. “I always said that if I moved again, I would be going to my own house. I didn’t know how, or where it was coming from, but I always felt that.”

Now, with her long-held dream on the verge of realization, Rita lets herself envision what’s next. Decorating her walls with art. Cooking the dishes of her native Ghana in a spacious kitchen and hosting her family in her own home. But, most of all, what homeownership will mean for Emmanuella and Ezekial. “That’s all a parent is looking for, a better future,” she says. “I want my children to get a better education, get a good job, and just live a good life. When I’m old, I’ll know I gave my kids a better life. My mind will be free. I’ll know they can handle themselves.”