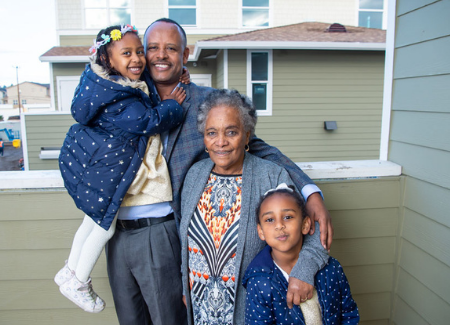 Father’s Day has us thinking about some of the amazing dads in our Habitat family. One of those fantastic fathers is Walelign – or “Wally,” as many call him – at Central Commons in Fremont. And one of his proudest feats of fatherhood has been giving his family the safety, security, and stability of homeownership through Habitat. It’s a journey that has transformed their lives.

A single dad, Wally had been raising his two young daughters in a rented century-old house, plagued by mold and disrepair. “Our landlord was usually reluctant to get things fixed,” he remembers. What’s more, the surrounding neighborhood was rife with crime and drug activity, which made him fear for his family’s safety – “especially when I am thinking about my little daughters,” Wally says. All of these concerns, along with a climbing rent, made Wally determined to change their housing situation, “for safety and financial reasons.” 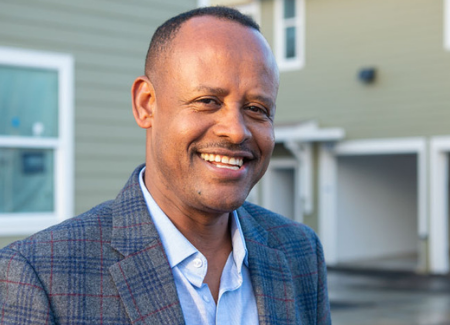 And of course, as a father, Wally’s greatest joy is in seeing his daughters thrive. Rebecca was just five years old, and Bruk only three, when we celebrated their Home Dedication at the start of 2019. According to Wally, “the kids are now getting so big, you wouldn’t even identify them!” Rebecca has just turned eight and wrapped up second grade, and Bruk is now six, done with kindergarten, and ready to tackle elementary school. “They are growing so fast,” Wally says, “I can’t believe it.” It’s a wonderful feeling, with “the kids always giggling, and doing well at school.”

It’s hard to believe now that it was a chance meeting with a friend – who happened to be a Habitat homeowner himself – at the local library that started Wally on the path to homeownership. And it wasn’t an easy path from that moment Wally learned his family was selected – “I was sleepless, and I felt like I was born again!” he recalls – to the day he got his house keys. “Sweat equity was hard for a father of two little kids and a full-time job,” Wally confesses, but he kept his eye on the goal: “I was always seeing the future: the happiness the new home will bring about to me and my family.”

That future is here, and Wally looks back on the journey with gratitude. “Thank you, Habitat,” he says, “and all those who helped our happiness come true.”