By Habitat for Humanity East Bay/Silicon Valley / November 11, 2017
A pay cut may be an odd thing to feel grateful for, but the Zanella family gave thanks when dad, Joseph, got one.
When Joseph and Teresa Zanella became Habitat homeowners in 2007, that pay cut was the first order of business. Joseph had been working “insane hours” in retail, trying in vain to complete his college degree in the process. With the stress of Joseph’s work hours, the strain of moving repeatedly, and a growing family, Teresa says that Joseph “burnt out really fast.” 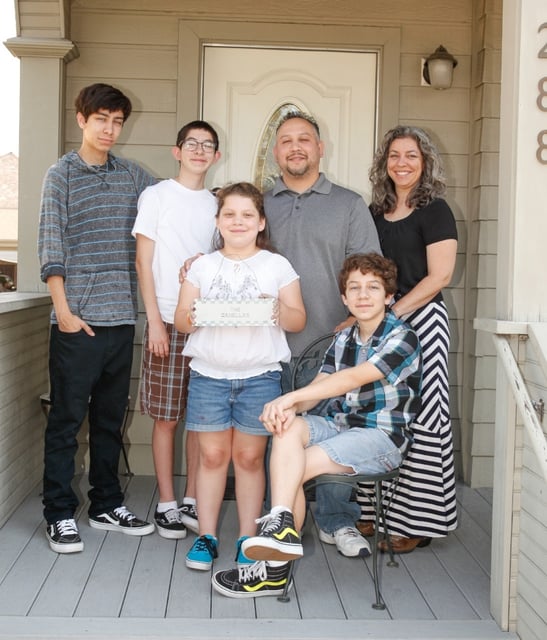 With a stable, affordable mortgage through Habitat, the Zanellas felt grateful that Joseph could take a job with fewer and more flexible hours. With the savings in housing costs, they could afford it; “The mortgage made it possible,” Teresa points out. “Otherwise, in this area, he would never have been able to take a job that paid less.”
That pay cut meant that Joseph could focus on finishing that long-sought degree, along with another dream, one he has held fast to even longer. He and Teresa met as teenagers in youth group at their church, and Joseph already knew his calling then. “I had always wanted to be in youth ministry,” he says, “but I never had the time… Many years later, I am finally able to fulfill that.” Indeed, Joseph followed up his Bachelor’s degree with seminary, becoming certified as a youth pastor. He currently serves at the same church where their love story began. Meanwhile, his Business degree earned him a managerial position that has significantly increased the family’s income.
As they look back over their ten years as homeowners, Teresa and Joseph give thanks for other blessings. They have four healthy, bright children. Josiah, age 17, hopes to pursue art and photography in college, while 15-year-old Gabriel has aspirations of becoming a video game designer. Teresa and Joseph can’t decide whether 13-year-old Isaias is an architect or a baker in the making. Cecelia, their youngest, is a budding veterinarian who – at age nine – has never known life outside the memories they’ve built in their Habitat home. And those memories are what they’re most grateful for of all – ten years in a home that has seen countless makeshift forts in the living room, their first Christmas tree, kids riding bikes with the neighbors, gatherings of family and friends.
“A home is just a life-changing thing,” Teresa says. “It affords you so many opportunities that you couldn’t have without it.”
Joseph adds, “Not only that, but Habitat does something for a person’s character… it’s a great program for the simple fact that it makes people better and it makes communities better.”
While Joseph, Teresa, and the kids celebrate another Thanksgiving as homeowners, we at Habitat East Bay/Silicon Valley are thankful for the opportunity to partner with families like theirs. With the support of our community – the open hearts of donors and sponsors, the eager hands of volunteers, and the hardworking partnership of families – we are giving more families more reasons to be thankful.
Share
Comment